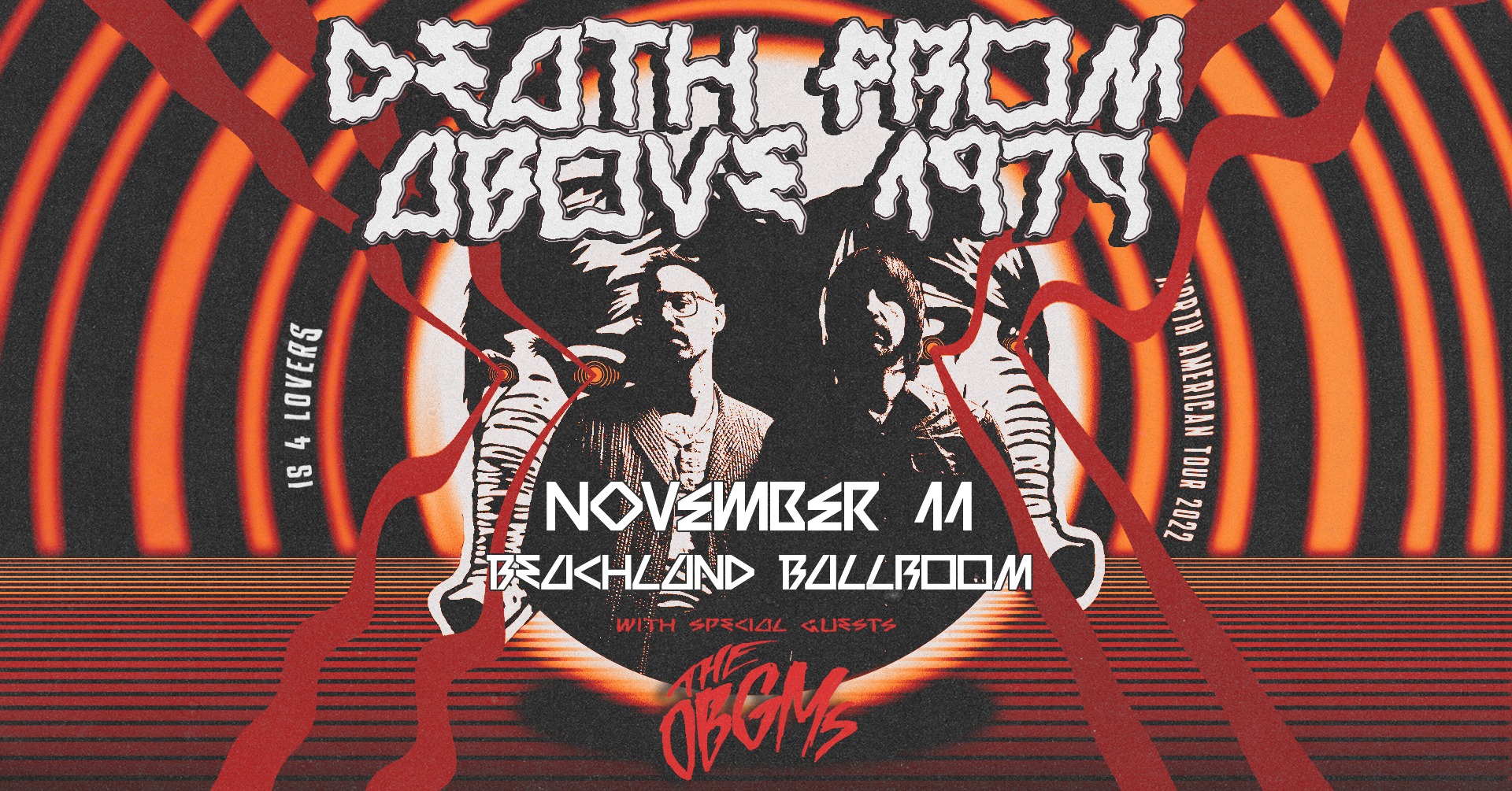 NEW DATE: Friday, November 11th, 2022
Rescheduled from March 16. Tickets from original date will be honored.
DEATH FROM ABOVE 1979: IS 4 LOVERS TOUR
WITH SPECIAL GUESTS: THE OBGMs
LIVE AT BEACHLAND BALLROOM
7PM DOORS // 8PM START
$30 ADV // $35 DOS // ALL AGES
About DEATH FROM ABOVE 1979
www.deathfromabove1979.com
Death From Above 1979 (DFA), the boundary pushing musical alliance created by Sebastien Grainger and Jesse F. Keeler, roared out of Toronto with the uncompromising one-two punch of 2002’s fuzz-bomb EP Heads Up and 2004’s epochal debut album You’re a Woman, I’m a Machine, complete with a North American arena tour with Nine Inch Nails and Queens of the Stone Age, before deciding mid-tour to part ways due to the strain of constantly touring.
Almost a decade later, the rekindled DFA fireworks lit stages around the world a blaze - amassing a posse of fans so passionate they incited a genuine, barricade-smashing riot at Austin’s Beauty Bar at the 2011 South by Southwest festival. Playing Lollapalooza,
Coachella, Glastonbury, Reading / Leeds, Osheaga, Lowlands and more, DFA continued to take the world by storm.
Their second album, The Physical World (2014) took a No. 3 spot on the Canadian Billboard album chart and peaked at No. 28 on the U.S. Hot 200, not to mention No. 3 and No. 7 spots on Billboard’s Top Alternative and Top Rock registries, respectively. TV appearances around their first two albums on iconic late-night shows including David Letterman, Conan O’Brien and Jimmy Fallon showed a whole new audience the DFA live goods.
Arriving at No. 20 on the Canadian Billboard album chart, DFA’s scorching 2017 outing, Outrage! Is Now prompted Pitchfork to remark that “Death From Above now sounds more vital than ever.” With three smashing albums to their name, the duo drummed up an easy 10
million views before going silent once more, to the dismay of fans.
Now, DFA is back with the return of their new album, Is 4 Lovers - once again creating a new sound and reimagining the format they created more than 20 years ago.

This site uses cookies. By continuing to browse this site, you accept the use of cookies.
I Accept